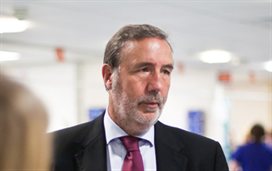 Paddy is the Police and Crime Commissioner for Nottinghamshire

You can find the Police and Crime Commissioners website here…

You can contact the office of the commissioner on this email nopcc@nottinghamshire.pnn.police.uk

About Paddy Tipping – the People’s Commissioner

Former MP Paddy Tipping was elected as Nottinghamshire’s first Police and Crime Commissioner (PCC) in November 2012 and re-elected with an overwhelming majority in May 2016.

As PCC he is responsible, in consultation with the Chief Constable, for setting the police budget and designing the Police and Crime Plan, which sets the direction for police service delivery in Nottinghamshire.  He also consults with local people to make sure their views are reflected in the way policing is provided and has the power to hire and fire the chief constable.

As an MP he was involved in setting up the Lawrence Inquiry and accepts that relationships between the police and black and Asian communities have been difficult at times.  Since his appointment he has worked hard to bring about change: commissioning a report into the key issues and ensuring that the recommendations are implemented.  Stop and Search in Nottinghamshire is now one of, if not the, lowest rates in the country with the highest outcome ratio.

He accepts there is more to be done and that includes increasing the diversity of the force.  He has been at forefront of this work and in the latest recruitment round 16% were from BME backgrounds.

He is Chair of the Association of Police and Crime Commissioners’ Resources, Efficiency and Strategic Finance Standing Group and has been at the forefront of the national discussions on police funding.

He is working hard, with support from local partners, to enhance neighbourhood policing and reduce anti-social behaviour, improve the services provided to victims, witnesses and vulnerable people and to focus effort in to areas of higher crime.

Paddy also has a number of hobbies that keep him on his toes including running and rambling. Keeping fit is really important to Paddy personally and being out in the fresh air gives him a chance to think. He also finds spending time with his daughters and four young grandchildren is always a joy – although the young ones are all very early risers!

This site uses cookies. By continuing to browse the site, you are agreeing to our use of cookies.

We may request cookies to be set on your device. We use cookies to let us know when you visit our websites, how you interact with us, to enrich your user experience, and to customize your relationship with our website.

Click on the different category headings to find out more. You can also change some of your preferences. Note that blocking some types of cookies may impact your experience on our websites and the services we are able to offer.

These cookies are strictly necessary to provide you with services available through our website and to use some of its features.

Because these cookies are strictly necessary to deliver the website, refuseing them will have impact how our site functions. You always can block or delete cookies by changing your browser settings and force blocking all cookies on this website. But this will always prompt you to accept/refuse cookies when revisiting our site.

We fully respect if you want to refuse cookies but to avoid asking you again and again kindly allow us to store a cookie for that. You are free to opt out any time or opt in for other cookies to get a better experience. If you refuse cookies we will remove all set cookies in our domain.

We provide you with a list of stored cookies on your computer in our domain so you can check what we stored. Due to security reasons we are not able to show or modify cookies from other domains. You can check these in your browser security settings.

We also use different external services like Google Webfonts, Google Maps, and external Video providers. Since these providers may collect personal data like your IP address we allow you to block them here. Please be aware that this might heavily reduce the functionality and appearance of our site. Changes will take effect once you reload the page.